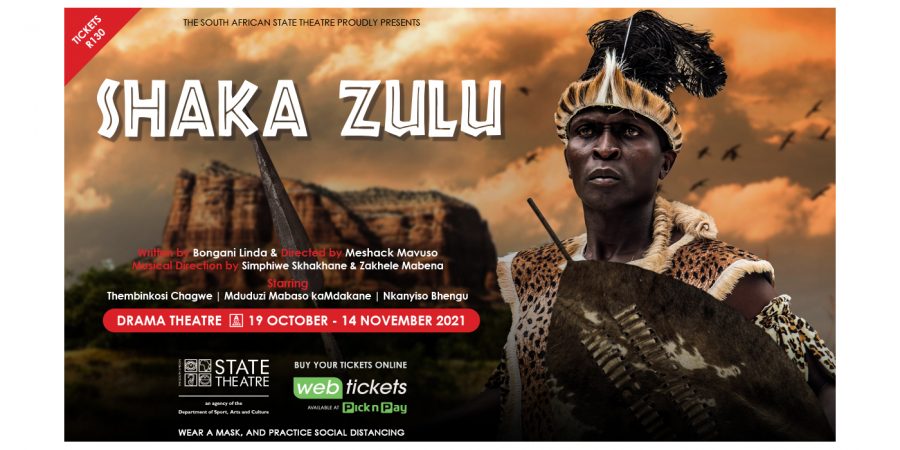 Highly billed as a musical dance spectacular, Shaka Zulu will dazzle audiences at the South African State Theatre (SAST) from 19 October to 14 November 2021. Its presentation is set to portray a decolonized account of the Zulu king’s rule and provide historical context to the succession disputes underway in the Zulu royal family.

Shaka Zulu: The Gaping Wound tells the story of the world-renowned warrior king, uShaka ka Senzangakhona who was a visionary, a patriot, a prophet, a diplomat, a military strategist, a nationalist, and a nation-builder who wanted to establish one strong and inclusive nation in southern Africa. The story is told through the eyes of a praise singer, taking audiences on a journey of historical imagination to the glorious past and leading them back through exhilarating song, praise poetry and energetic Zulu dancing to a proudly and unapologetically Pan-African future that the ancestors envisaged.

The thrilling musical production also features notable stars such as Zakhele Mabasa Mokone, Mpho Malatsi and Paulinah Manyama who make a forty star-studded cast, which is backed by an eight-piece band, in which award-winning musicians Simphiwe Skhakhane and Zakhele Mabena are musical directors.

As a director, Magabane has directed the stage play One Square Mile in 2015 and was Assistant Director for Aubrey Sekhabi’s Freedom-The Musical in 2019. Off stage, he directed the TV Series ‘Bay of Plenty’ in 2007.

Magabane comments: “For nearly 200 years, historians and storytellers who are disciples of Western and Eurocentric history have portrayed the Zulu King as a bloodthirsty tyrant who was obsessed with war and power. However, decolonised and diversified Afrocentric historical accounts have demonstrated that this is not true as King Shaka and his legacy constitute an important foundation and one of the key pillars of the African people’s vision for unity, freedom and national pride.”

King Shaka Zulu is considered to have been an eminent shepherd of unity who was determined to establish one mighty African Nation. Before he could realise his vision, he was assassinated in a regicide spearheaded by his brothers Dingane and Mhlangana, assisted by the warrior king’s trusted servant Mbopha ka Sithayi. Upon his death in September 1828, he is believed to have cursed his assassins by warning them that their rule shall be characterised by bloodshed and mayhem. Magabane says many still believe that his curse in the face of betrayal by those he trusted most continues to haunt the country until this day.

“Shaka Zulu is an emotional plea by present generations to the spirit of Shaka to forgive us and bring an end to bloodshed that has engulfed our daily lives despite the attainment of political emancipation. It is clear then that as a nation we need to seriously deliberate about the painful reality of our complicated past before we could confidently map the way forward into a brighter, peaceful and prosperous future,” concludes Magabane.